Hmmm there seems to be a problem fetching this series right now. Last successful fetch was on April&nbsp25,&nbsp2021&nbsp01:18 (

What now? This series will be checked again in the next day. If you believe it should be working, please verify the publisher's feed link below is valid and includes actual episode links. You can contact support to request the feed be immediately fetched.

I first shot the sun we do not see in the spring of 2015. Chris Van Matre duplicated my finding some years later and has now filmed it from Colorado, Houston and South Carolina capturing different positions of what I now call the Spiritual Sun. I suggested using a light polarizing filter to film the Spiritual Sun, which he did a day later. The astounding results are covered in this member’s only episode, with more to follow. In short, it is looking like the sun we do not see may be a thing we can replicate, and prove beyond doubt. I will get back to scope work this spring (2021) to do what I do best – discover truths about the above, while existing below.

*The sun we do not see discovered in May of 2015 using a Coronado Hydrogen Alpha telescope piggybacked on an 11” Celestron STC, filming with a Nikon D800e 36 MP DSLR.

*After years of telescope and camera work I announced that space is likely better described as some sort of liquid, April 13, 2016.

* Proved the moon plays no role in solar eclipses, after many years of filming all eclipses, on August 21 2017. 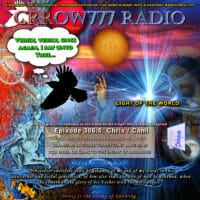 The post 306.5- The Sun We do not See – Polarization Test with a Solar Telescope (Free) appeared first on Crrow777 Radio.

1M ago4w ago
Subscribe
Unsubscribe
Ogni mese+
The Birdy Num Num Indian podcast is all about inspiring the creative Indian.With over 35M views online spanning a career in IT and Stand Up Comedy, Indian-American comedian Sanjay Manaktala is the epitome of "because life begins after engineering." A good chunk of his guests also live by this philosophy. Every Monday and Thursday Sanjay talks creativity, dating, technology, life, current events and general life advice from the perspective of a 30 something Indian American guy traveling the w ...
C
Conversations in Anthropology

11d ago1w ago
Subscribe
Unsubscribe
Ogni mese
A podcast about life, the universe and anthropology produced by David Boarder Giles, Timothy Neale, Cameo Dalley, Mythily Meher and Matt Barlow. Each episode features an anthropologist or two in conversation, discussing anthropology and what it has to tell us in the twenty-first century. This podcast is made in partnership with the American Anthropological Association and with support from the Faculty of Arts & Education at Deakin University.
B
BackStory

11M ago45w ago
Subscribe
Unsubscribe
Ogni mese
BackStory is a weekly public podcast hosted by U.S. historians Ed Ayers, Brian Balogh, Nathan Connolly and Joanne Freeman. We're based in Charlottesville, Va. at Virginia Humanities. There’s the history you had to learn, and the history you want to learn - that’s where BackStory comes in. Each week BackStory takes a topic that people are talking about and explores it through the lens of American history. Through stories, interviews, and conversations with our listeners, BackStory makes histo ...
T
The History of Rome

4y ago4y ago
Subscribe
Unsubscribe
Ogni mese
A weekly podcast tracing the history of the Roman Empire, beginning with Aeneas's arrival in Italy and ending with the exile of Romulus Augustulus, last Emperor of the Western Roman Empire. Now complete!
C
Curiosity Daily

44m ago44m ago
Subscribe
Unsubscribe
Ogni giorno
The award-winning Curiosity Daily podcast from Curiosity.com will help you get smarter about the world around you — every day. In less than 10 minutes, you’ll get a unique mix of research-based life hacks, the latest science and technology news, and more. Discovery's Cody Gough and Ashley Hamer will help you learn about your mind and body, outer space and the depths of the sea, and how history shaped the world into what it is today.
O
On this day in Blues history

9m ago9m ago
Subscribe
Unsubscribe
Ogni giorno+
What happened on this date in the history of the Blues?
E
Embedded

25m ago25m ago
Subscribe
Unsubscribe
Ogni settimana
Embedded is the show for people who love gadgets. Making them, breaking them, and everything in between. Weekly interviews with engineers, educators, and enthusiasts. Find the show, blog, and more at embedded.fm.
E
Every Little Thing

2d ago2d ago
Subscribe
Unsubscribe
Ogni mese+
Why do we cry? Did cavemen really carry clubs? Can swearing make you stronger? On ELT, you call with a question, we find you an answer. Our helpline is open 24-7. Call 833-RING-ELT or send an audio message to elt@gimletmedia.com.
T
This Week in Science – The Kickass Science Podcast

3d ago3d ago
Subscribe
Unsubscribe
Ogni mese+
Lexicon Valley is a show about language, from pet peeves, syntax, and etymology to neurolinguistics and the death of languages. Hosted by linguist John McWhorter.
Ascolta più di 500 argomenti