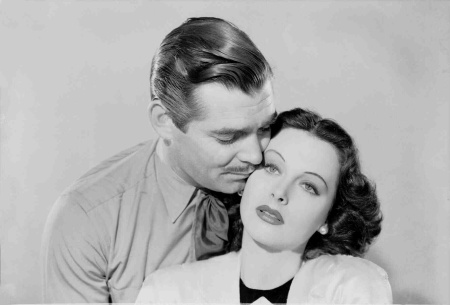 In the category of incredible, impossible-to-make-up stories, the real life story of Hedy Lamarr may take the cake.

She was one of the most glamorous film stars of the 1930s and '40s, and at the height of her fame was dubbed “the most beautiful woman in the world.” What remained hidden for decades was that Lamarr led a sort of double life— or really, multiple lives.

Born Hedy Kiesler in 1914 in what was then Austria-Hungary, she first fled an unhappy, early marriage and then Nazi-occupied Europe. Once in the U.S., she shed her Jewish name and identity and distanced herself from a scandalous start in the movie business to become a major film star.

But that still doesn't really tell the half of it. What wasn't known back then, and still isn't fully appreciated today, is that Lamarr was also a talented, self-taught inventor. One of her inventions, a remote-controlled torpedo that used frequency hopping, was a precursor to Bluetooth and WiFi technology we use today.

The new documentary, “Bombshell: The Hedy Lamarr Story,” written and directed by Alexandra Dean, fills in a lot of the remaining blanks in Lamarr's story. An audio recording of Lamarr herself, which Dean discovered during the making of the film, forms the backbone of the documentary.

On Lamarr's natural inclination toward inventing:

The thing about Hedy is that she started out as an inventor — that’s her natural self. She did it with her father as a kind of playful activity. In their off hours they would take apart gadgets. They loved radios, they took apart radios. She also took apart her music box and put it back together. That was just how her brain was wired.

On the audio interview with Lamarr that Dean discovered while making the film:

At first, you’re lulled into this interesting introduction she gives you which is, "This is going to be the opposite of what you think about me." And then she unfolds it on these tapes in this way that is just so fascinating. You go into world after world that she lived in, and it’s almost like "Forrest Gump." She’s interacting with these major moments of history. She gets into scrape after scrape and escapes them, and then she does these things that you can’t even imagine a Hollywood actress trying to do in the 1930s. And then she’s ignored for it. She takes you through all of that, and I think that without her voice you just wouldn’t believe it.

It was really this idea that if you’re going to try and remote-control a torpedo, the big problem is that the enemy can hear your radio signal and jam it. They can stop the signal from traveling between the ship and the torpedo that it’s trying to control. So what Hedy wanted to do was create a signal that couldn’t be hacked and that couldn’t be jammed. Her idea was: Why not just hop around on frequencies so that nobody knew where the signal was going to go next? If they jammed the signal, it would only be for a split second. It was the basis for frequency hopping as we use it today, which is one of the ways that we communicate over WiFi, Bluetooth, GPS and some cell phones. So it really went into many many things through the military. And that's because the military did dig [Lamarr's patent] out, give it to some contractors, one of those contractors wrote a tribute to Hedy, so we actually know that he used her patent and put it in all these important military inventions, which in turn influenced other inventions. [JOHN RABE: But they never paid her?] No, not a cent.

On Lamarr as a movie-making pioneer:

What’s so interesting about Hedy is that she gets punched and knocked down like she does with the invention, and then she gets back up, dusts herself off, and says, I’m going to make my mark on the world in a different way. There were people that had come before her, but in ‘46, when she started producing her own films, there was no actor out there producing their own films with the exception of Bette Davis, a friend of hers. In 1946, Hedy and Bette went out there and said, If the studio system is not going to work for us, we’re going to create our own films. And that was in a way just as revolutionary as saying, I can affect the outcome of World War II with my inventions.

On the film’s resonance with the current sexual harassment reckoning in Hollywood:

The world has shifted around this film and it is being received differently than I thought it would be. But it’s exhilarating because the world feels more ready for the conversation that the film kicks up, which is, Why couldn’t a woman this talented make her mark on the world the way she wanted to? Why didn’t we receive her with open arms and find out what else she could’ve invented? Who else have we ignored and erased because we were not able to accept that somebody that looked like that, or was a movie star, could also be a brilliant inventor? And that’s really all part of this #MeToo moment, I think, because what we’re saying is, women are silenced in different ways, and if we don’t explore it, what kind of talent do we lose?

"Bombshell: The Hedy Lamarr Story" airs on May 18 on most PBS stations.