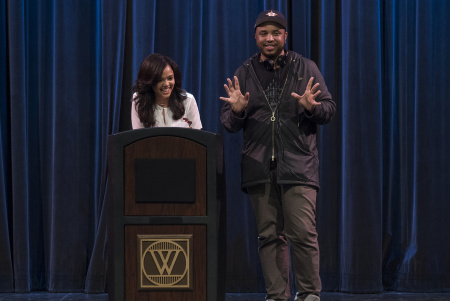 Now a Netflix series in its second season, the show follows a group of black students at a fictional, predominantly white, Ivy League college called Winchester University. It's a comedy that's not afraid to delve into deep social commentary about truth, race, and what it means to be an American.

The Frame host John Horn recently spoke with the show's creator, Justin Simien, about the series and how he hopes it can help people have empathy for others.

On the historical research he did for the new season:

I'm always trying to dig down to what the deeper issue is. I think the instinct is that "Dear White People" is just a topical series of talking points. But it actually isn't — in our heads anyways. The sort of banter and the way they articulate their ideas is sort of the frosting. The actual cake is made up of a character study in one part, but also a study of human nature — a study of this country. One of the things that I desperately needed to see in history was what was happening to me in the present, which was that I found myself in the center of these alt-right attacks online, some of which were coming from armies of fake accounts. I was trying to get a grasp on what this phenomenon was and why it was so different than when we put the movie out. The deeper I dig, the more I realize this is actually a tradition in America.

On the online attacks he received after the first season was released:

When I started to think about it in the context of history, it would bring me to tears because these people don't fully realize the tradition that they're actually carrying on. It's a tradition that has often turned fatal and violent and has blotted out millions of people's voices. I'm lucky that it's just on Twitter for me. It's not like a physical reality when I walk around my neighborhood or [a situation where] people don't like what I have to say and they're chasing me down. This was the experience of most black people for most of the time in this country. Jack Moore, he's a white writer on our staff of all black writers, and he oddly enough got some of the worst hate. I think because people saw that he was a white guy or something, I'm not sure. But he was really made a target of this stuff. I thought it would be interesting to have this conversation play out where it's not really clear who the show is siding with at all. Because they both make really interesting points.

On the issues he wanted to address in season 2:

I think this season there's a sense of urgency to diagnose the issue. I think amnesia, fake news — these are all buzz words but they describe the American condition to a T. The more you dig, the more you really look, you sort of get past what you vaguely remember from history class and you realize there's always been this concerted effort in this country to erase the voices of marginalized people because it makes people feel bad. Honestly, that's what it comes down to. We want to just cut into our Thanksgiving turkey and not think about the genocide that preceded our being here. We want to be like, Oh, Manifest Destiny— God wanted us to have this, but really not deal with any of the consequences of what that meant. We don't want to drill down into the fact that All men are created equal was only about white men who had enough money to own property in this country. That's all it applied to. Nobody else was created equal. That's why nobody else is mentioned. And so, these are the things that you'd rather not look at, but we must, because slavery is a wound in this country. And like Malcolm X said, you don't heal the wound by pretending the knife was never there. You have to address the wound.