The Frame | 89.3 KPCC « »
Documentary 'A Suitable Girl' examines arranged marriage in India from a woman's POV 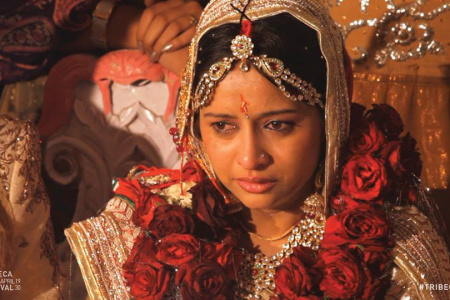 A scene from the documentary, "A Suitable Girl."; Credit: Amrita

To most Americans, the idea of arranged marriage seems foreign, old-fashioned and very patriarchal.

After all, most modern and Western women believe they alone should decide who they want to spend the rest of their lives with. That said, we still carry a lot of misconceptions about what arranged marriage means for cultures that still practice it today.

The new documentary, “A Suitable Girl,” follows three young women in India — Ritu, Dipti and Amrita — as they navigate the matchmaking process with the help of their families. But it also shows the struggles that these educated women have when trying to negotiate their personal career goals alongside the traditional pressures to marry.

The Frame's John Horn recently spoke with co-director Smriti Mundhra and producer Jennifer Tiexera about their seven-year journey to make this film.

On setting aside personal beliefs on what marriage should look like while conducting interviews:

Jennifer: There's so many misconceptions of this world — India in general — and the idea of arranged marriages. It was really quite easy to start, as we got to know these women and what they were going through, to relate to their journeys. I feel like women in America face a lot of the same pressures when it comes to getting married and having children. A lot of us women have strong influence from our family members as well. I think that was a thing I related most to. There was definitely familial pressures and cultural pressures in my own family that [made me feel] like, Oh this isn't that much different.

On misconceptions about arranged marriage:

Smriti: I'm from the Indian culture, I've spent time in India, but I come from a relatively progressive family and I was raised here with Western values, so to speak. My feeling was [that] we're going to go to India, but once we actually start talking to young women they're going to be like, No way, no more arranged marriage, this institution is going out. As women are becoming more financially independent and getting opportunities to work outside of the home and getting higher education, there's no way this is going to last. We really went into this thinking we're going to capture the last of this dying institution. That is not what we found. We found that, by-and-large, people still believe and ascribe to the system of arranged marriage. It's such an ominous thing to say but all it really is, is involving your family in the decision-making of finding a spouse. And the value-set that it speaks to is just slightly different than what we look for in the West. It's more based on family and community and less on individual wants and needs.

On gaining the trust of interview subjects:

Smriti: I had a prior relationship with Seema. She was my matchmaker, actually, before all of this film stuff started. There was sort of an inherent trust. She's part of my community and very known to my family. We sort of stepped in to each scenario and started gaining trust and more and more access. Seema was very eager to have us document her business and her lifestyle. We knew the real story was with her and her daughter. We really worked to get access. Her daughter Ritu was really reluctant initially to film with us, but by the end she either forgot we were there or was able to communicate things through us that she couldn't with other members of her family.

On how films like "The Big Sick" depict arranged marriages:

Smriti: I love that film. And it was their story. I think I told a version of my story in this film and they did the same. But I did have an issue with the way they depicted arranged marriages and particularly South Asian women in that film. It was a very one-dimensional sort of portrayal. And I've said this also about shows like "Master of None" and "Meet the Patels." When these stories are told from the male perspective, you get a very one-dimensional view of South Asian women — that we only want to get married. To some degree, a lot of us have internalized that messaging from when we were younger. But their truth is much more complex. And that's what we tried to portray in our film — that we are also sort of bound by culture and tradition. We are trying to do the best we can to be good daughters to our parents and not fall off the ledge of society.