The Frame | 89.3 KPCC « »
How a veteran writer got Paul Simon to open up about his legendary career 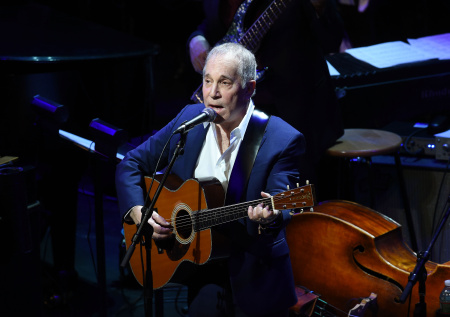 When music critic and author Robert Hilburn first approached Paul Simon about writing an authorized biography, the singer/songwriter was hesitant about the idea. Simon was working on his latest album, “Stranger To Stranger," and was not eager to rehash the ups and downs of his long career.

Hilburn eventually got Simon to cooperate. His new book, “Paul Simon: The Life,” was compiled from more than 100 hours of talking with Simon, as well as interviews with his ex-wife, the late Carrie Fisher; TV producer Lorne Michaels; comedian Steve Martin and many others.

The Frame's John Horn caught up with Hilburn recently on the morning after a Simon concert at the Hollywood Bowl — the first of three shows there on what the singer says is his final tour.

On why he chose Paul Simon as his next book subject:

After the Johnny Cash book, I thought it would be easy to find another subject. I thought, Boy oh boy, this is going to be fun! There are certain qualities you want in somebody to write about — you want somebody who's significant, who's going to be remembered 50 years from now, who's interesting and [someone] you had a certain access to. You don't want to knock on someone's door that you don't know and say, I'd like to write a book about you!

The two people at the top of my list were Joni Mitchell and Paul Simon, because I love songwriting and I wanted to explore the process. I gradually realized that with Paul, it was going to be hard to get his personal life told because he's so private. But he's got these great songs. And he was still writing great songs at the time. If I could get him to talk about those songs, and how artistry works — how it comes about and, importantly, how you protect that artistry against fame, against drugs, against divorce, against laziness, against fear of failure. If you get caught up in fame and that becomes more important than your music, you're going to slow down. And it never did with him.

On his Simon found his voice:

You think this guy who's done all this stuff [surely] came out of the womb playing piano and writing great things ... but he wasn't. He spent five years writing songs, recording demos, trying to get records with the worst songs you could imagine. For instance, Connie Francis had a big hit in the '50s called "Lipstick on Your Collar." So [Simon] records a song called, "I Want to Be the Lipstick on your Lips." Can you imagine anything worse than that? And he did that for five years until a few things happened. He took a literature class at Queens College and this one teacher who was so important introduced him to T.S. Elliot and Robert Frost. That gives him this literary edge that he didn't have before. But he still keeps writing these teen pop songs until one day, he hears Joan Baez and — most importantly — Bob Dylan and says, Woah! I can do folk songs.

On how Simon dealt with failures, like his Broadway musical, "The Capeman:"

Hard ... he's a very sensitive guy. School teachers used to write that he'd break out in tears. He doesn't read reviews, partially because he doesn't want to be influenced by what other people say — good or bad. But also he doesn't want to be hurt. I remember ["The Capeman"] was just savagely attacked. He went to bed that night and he woke up, and it was 10 in the morning and he knew it was a failure because people would have been calling congratulating him if it wasn't. It took him time [to recover]. Luckily he had Edie Brickell, his third wife, who was a great balance in his life. Before Edie, he was so obsessed with music that he didn't really have time for relationships. They were always falling apart. Edie is what brought common sense to his life, stability.