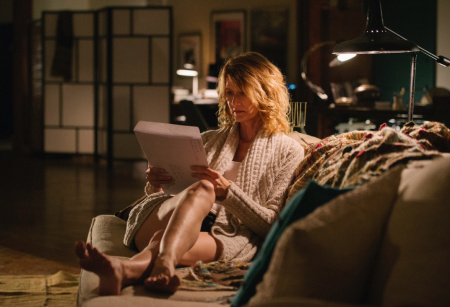 “The Tale” is based on the sexual abuse that filmmaker Jennifer Fox experienced as a 13-year-old girl in 1973. The abuse began at a rural horse riding camp by a coach. One of the owners of the riding school, a woman, is complicit in the abuse.

The timing of the film's premiere was eerie. When it debuted at this year's Sundance Film Festival, gymnasts and other athletes were testifying in the sentencing phase of pedophile doctor Larry Nassar. Just as many of those women chose to give their names, Fox also uses her real name in the film. Laura Dern plays Fox as an adult who investigates what actually happened to her when she was a young teen.

"The Tale" debuts on HBO on May 26. The Frame's John Horn spoke with Fox at Sundance about the making of her powerful autobiographical film.

On the common misconceptions of child sexual abuse:

The first is that it's about good-and-evil, or it's a white-and-black story. A lot of emotions go in for the child, I think, if I use myself as an example. I felt a lot of love for my coaches. I adored them, I looked up to them. I'm a pragmatic little kid and I was exchanging attention for this, which is a very complicated story. One of the misconceptions is that this strange person comes and gets your child, usurps them, and gets them to have sex. Most of the time that isn't it. Ninety-three percent of the perpetrators, the child knows. So that's a misconception. And sometimes the child feels love. That's another confusing thing for adults. As in my story. I'm not saying it was always like that for everybody, but I would say that's sort of the beginning. Let's unravel it. I think our society is very afraid to get in the gray [areas]. And if we don't get in the grays, we can't stop and prevent child sexual abuse. We can't heal.

On the short story she wrote as a child that inspired the making of the film:

The words that we use for Jenny, my younger self, that I wrote when I was 13 — and that we use in the film acted by Isabelle Nelisse, beautifully — are actually straight from the piece that I handed in to my English class and got an A for in 1973. To be fair, in 1973, people didn't have [sexual abuse] on their radar. My teacher really did write on the back: "If this is true it's a travesty, but since you're so well-adjusted it can't be true."

On how she coped with the re-traumatization of shooting the physical scenes:

Those scenes were approached in so many ways. They were crafted very much like you would film a boxing scene. I think a lot about "Raging Bull," which is from when I was coming up, where every shot was shot listed. It was choreographed, taken apart, put back together. Isabelle and Jason [Ritter, who plays the coach] weren't shot together. Jason was shot with a body double. Isabel was shot on a vertical bed with non-sexual cues. Nevertheless, I am constantly going back-and-forth with what happened to me and the scene. And checking also that it's authentic, because I don't want to romanticize either. There are many things that happened that aren't in the film because it's almost too much to say. But there are many things that I insisted on keeping, like the language that [the coach] uses during those physical scenes, which I always remembered because it's so horrifying — maybe even more horrifying than seeing the act. I think it's this constant going back-and-forth, even now — thinking about them, thinking of the film. Sometimes I have feelings [that] maybe other survivors will understand, where I feel like I've broken a sacred trust.