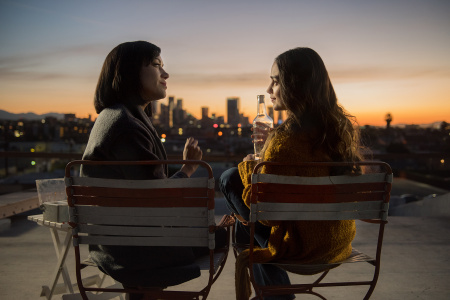 Tanya Saracho first got her start in TV as a writer on the Lifetime series "Devious Maids." Just one day into the position, she says the excitement of her new job was diminished when one of her fellow writers told her she'd been brought on as the "diversity hire."

And the response she got when she asked what diversity hire meant? "Oh, honey."

"That stayed with me," Saracho says. "It made my skin crawl."

The tables have now turned for Saracho, who serves as creator, showrunner, and executive producer of the Starz series "Vida." The show centers on two Mexican-American sisters, Emma and Lyn, who come back home to the Eastside of Los Angeles after the death of their mother, Vidalia.

"Vida" focuses topics like socioeconomic inequality, the immigrant experience, and gender identity in a way we don't often see on television. Not only is the show radical in its content, it manages to be cutting edge behind the scenes too – Saracho has created an all Latinx writers' room.

The Frame host John Horn recently spoke with Saracho about her career trajectory, going from theater to television, and her vision for her show, "Vida." To hear the full interview, get The Frame podcast.

On how storytelling in television differs from playwriting:

That is what I'm still trying to figure out. Year five, you know? I've been here five years now. They handed me this show at three years in and I had developed a couple things but nothing happened because I think I hadn't figured it out. When you work in a writers room for a showrunner, you serve that story and you serve that showrunner. I don't think it should be called writing, I think it should be called rendering content. Because you are there to render the content that is agreed upon in the room, and you're serving the voice of the main storyteller, which is the showrunner. So that's different. It's different now that we're rendering my content.

On when she felt she could finally tell stories on television that were relevant to her own experience:

When I got to "Looking." I didn't know that you could write stuff and they would put it on TV. That was that experience. My boss was Andrew Haigh and he came from film, he had never done TV. It was his first TV show and he was running it. And I think he was like, write it and we'll put it on. It was lovely. It was about queerness, and also I was the only girl in the room. Well, Jill Soloway was there for a minute and then 'Transparent" happened and then I was the only girl. There was another kid of color in there and we went on to be on two other shows together. It's different to have a voice. I felt like I had a voice every day in that room. HBO doesn't have the diversity hire position. I have that position [on "Vida"] and I do not let anyone say that it's "diversity". I say "the funded position." I don't even want them to think about that.

On the use of Spanish in the show:

No subtitles. That was at the second meeting, when I was like never subtitles. We have to be steeped in the world of the mainstream all the time. I think it's okay to be steeped in this world. They'll never miss story, ever. That's a thing in my plays, I do the same thing. There's more Spanish in my plays. Some people have to sit through them and they don't miss a story. And here, it's more 'Spanglish' than anything. But yeah, it's like whole sentences and some characters like Spanish more. I think the 'Spanglish' world is really important. Especially because the sisters don't really speak Spanish. They're second generation Americans. This is an American show. So when Lyn was like, yeah I wasn't going to be a pocha like mom and you – a 'pocha' is someone who speaks 'Spanglish,' and it's looked down upon. That term I had never heard on TV before.

On what she hopes white cisgender males will take away from this show:

I have been watching male programming all my life. And I'm completely interested in it. Like I love "Breaking Bad" and I like "Game of Thrones." I hope that the interest in the family stuff, the how do we keep our legacy, how do we keep this thing that our family has, this building, how do I reconnect with my family member? I hope those things. Also, if you want to take a look into this world that you don't know about the Eastside of L.A. or also Latinx culture. Also young, queer culture too. Also activism. There's an activist in this. And if you don't know about that subject matter...and also how she gets a little bit toppled by the patriarchy herself. All those things I hope are interesting in a way where I don't have to think when I watch an all-male show.