The Frame | 89.3 KPCC « »
Tired of blockbusters? Ethan Hawke has 3 indie movies for you this summer 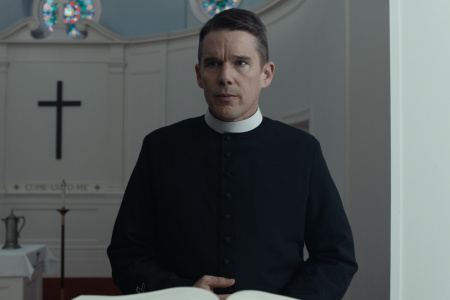 Actor and filmmaker Ethan Hawke boasts a long and storied career in television, film and theater.

This year, Hawke has once again stepped onto the big screen for not just one, but three movies: a romantic comedy called "Juliet, Naked"; a music biography called "Blaze"; and the drama, "First Reformed."

Hawke's character is both physically ill and haunted by the psychological scars of having encouraged his son to join the military, only to be killed in action in the Middle East. When Hawke's character finds himself unable to offer counsel to a man convinced that man-made climate change will destroy the Earth, it prompts a world-changing crisis of faith.

Hawke's performance in the role exemplifies how he approaches each role he takes:

I’m interpreting Reverend Toller for you, so that I can spend several months thinking about this guy and you can spend 90 minutes and walk away with everything I learned and how it applies to your life.

John Horn sat down with the Oscar-nominated actor to discuss his three new movies, as well as his preference for theater and independent films.

Hawke debuted both "Juliet, Naked" and his music biopic, "Blaze" (about the late country singer, Blaze Foley), at the 2018 Sundance Film Festival and they'll be out later this summer. "First Reformed" arrives in theaters on May 18.

On independent films and the need to always be working:

There’s a lot of independent films where they won’t pay you. It’s never been easier to make a movie and it’s never been harder to get it released. So more and more there’s this thing that’s happening in the industry where they want you to act in a movie and the script might be great or not [and], By the way — we’re not going to pay you because we don’t have any money. The problem with that is it creates a scenario where you might’ve done two movies, but you still have not been paid. So now you have to work.

On Paul Schrader's presence as a director:

What first grabs you is Paul Schrader’s reputation. There’s clearly an artist at work in his filmmaking, and that’s uncommon. Most people are trying to sell something and Paul is trying to create something and say something. So that’s exciting as an actor. I have so much admiration for Paul. If I didn’t see myself excelling in the world, if it didn’t speak to me, I probably wouldn’t do it. [Schrader] knows what he wants so all I have to do is be Reverend Toller, in the context that is being framed, and find out how to make each one of these shots exciting and visceral and alive to the best of my ability.

On the visual style of "First Reformed":

What I find so fascinating is that it’s just reminiscent of a kind of art film that just doesn’t get made anymore. It’s like a Bergman film. It’s super old-fashioned. Nobody even tries to do this anymore. I think that’s what’s arresting and thrilling about it. Even your basic indie art house movie is still trying to be a studio movie, it still wants to win an Oscar, it's still hoping to crack $50 million.

On writing and directing a biography about country musician Blaze Foley:

We all can write a musical biopic: He’s struggling, he came from a poor family. Something really bad happened where he is hurt. Then he finds his voice, then gets signed, then the demons of success come in. I wanted to make a movie that celebrated an artist that the world didn’t celebrate, that was met with absolute indifference — like almost all the artists I know. I wanted to do that movie.