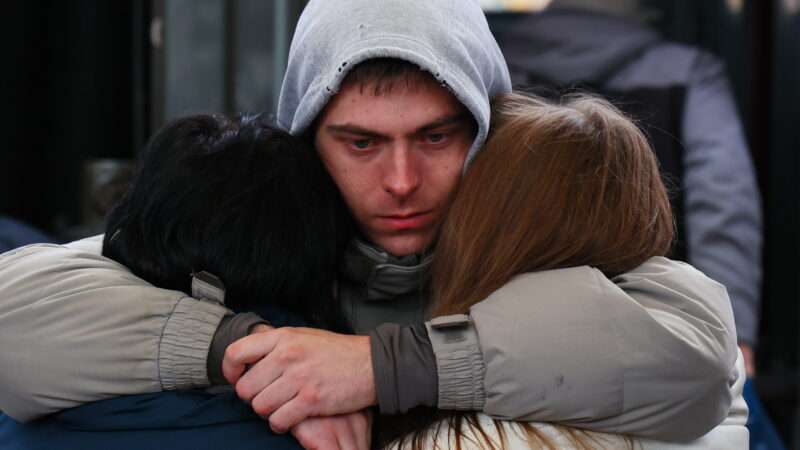 In this week's The Reason Roundtable, editors Katherine Mangu-Ward, Matt Welch, Peter Suderman, and Nick Gillespie consider the elevated risks from the conflict in Ukraine and commend the recent protests in Iran.

It's belated by almost a couple months, but the CIA turned 75 on July 26. Is there a libertarian argument in favor of having a Central Intelligence Agency, and if yes, how closely would a libertarian-approved CIA resemble the one we have?

"Russians Are Fleeing the Threat of Conscription," by Eric Boehm

"Ukraine Changes the Face of War Forever," by Nick Gillespie

"Will Ruger: How Libertarians Should Think About Ukraine Invasion," by Nick Gillespie

18d ago2w ago
Subscribe
Unsubscribe
Ogni settimana
Elections are about more than who wins and who loses. The New York Times reporter Astead Herndon takes us beyond the horse race to explore how we got to this fraught moment in American politics.
T
Truth vs Hype

10d ago1w ago
Subscribe
Unsubscribe
Ogni mese
Truth vs Hype travels to the Ground Zero of the biggest story. Every week, re-defining reportage on Indian television.
P
Pod Save the People

9h ago9h ago
Subscribe
Unsubscribe
Ogni settimana+
A bootstrappers podcast for founders, entrepreneurs, visionaries and dreamers who are building businesses from the ground up without the taking on debt or selling equity. Here we cover marketing, sales, organization and mindset issues that matter to you
O
OPB Politics Now

seconds ago30s ago
Subscribe
Unsubscribe
Ogni giorno
Wake-up with America's first news - Host Gordon Deal goes beyond the headlines with the day's first look at news and business news from the U.S. and around the world; bringing a lively blend of intelligent information, humor, and expert analysis to morning radio.
T
To the Point

4h ago4h ago
Subscribe
Unsubscribe
Ogni mese
A monthly reality-check on the issues Americans care about most. Host Warren Olney draws on his decades of experience to explore the people and issues shaping – and disrupting - our world. How did everything change so fast? Where are we headed? The conversations are informal, edgy and always informative. If Warren's asking, you want to know the answer.
T
The Seen and the Unseen - hosted by Amit Varma

1d ago1d ago
Subscribe
Unsubscribe
Ogni settimana
The Seen and the Unseen, hosted by Amit Varma, features longform conversations that aim to give deep insights into the subjects being discussed. Timeless and bingeworthy.
Ascolta più di 500 argomenti